It is widely thought that creative play can help a child’s development, but did you know that the opportunity to play with musical toys before they can even walk or talk can help benefit the developmental growth of your child?

Researchers at McMaster University in Ontario, Canada, have recently published a study into whether introducing musical toys to children at the very youngest age can begin to have a significant impact on their development.

In fact, it was found that one-year old babies who interact with musical activities smile more, communicate better and show a far more developed brain. Laurel Taylor of the University says:

“Many past studies of musical training have focused on older children. Our results suggest that the infant brain might be particularly plastic in regards to musical exposure.”

The study, which received funding from the Grammy Foundation, grouped babies and their  parents, where they spent six months participation in one of two types of weekly music play.

The study showed that infants who had participated in musical classes had shown sensitivity to difference in music.  Even the infants’ brains responded differently, with their brainwaves showing a more developed and larger response to musical tones than infants who had not been engaged in music-based play.

The progress t didn’t stop there however as it was shown that children were able to communicate better on a daily basis; examples of increased development included the ability to point at objects which were out of reach. Study coordinator, Anrea Unrau said:

“There are many ways that parents can connect with their babies. The great thing about music is, everyone loves it and everyone can learn simple interactive musical games together.”

What can you do to help your child’s musical development? 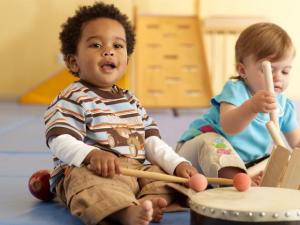 Not everyone has access to a university research study to keep their baby developing in line with the findings from this study, but there are ways in which you can contribute to their sensory development! We are very passionate about encouraging child development with our toys at WoodenToyShop.co.uk and regularly recommend our range of musical toys to parents as way of getting children involved with music at an early age. Here are a few facts about using music can help aid your child’s development:

The advantages and benefits of teaching your child some sort of musical instrument suggest that it not only reaps benefits during their early development but as they grow older..

In fact, in later life, studies from the National Association for Music Education have shown that students of arts are generally more creative, appreciative of other cultures as well as providing a social experience with like-minded and appreciative people!

Jon Grocott is the co-founder of WoodenToyShop.co.uk, one of the UK’s premier online retailers of traditional and contemporary wooden toys. Founded in 2010, WoodenToyShop.co.uk is passionately devoted to the kind of imaginative play that is timeless even in our increasingly electronic age. Under Jon and his business partner’s creative control, the business has become a haven for those who love in tactile, well-crafted and environmentally responsible toys and has maintained a commitment to retailing those toys that aid child development and education as well as bringing plenty of fun to the table.

So, have you noticed that things are looking a little different around here?